What is powerful enough to be at the intersection of NASA, the New York Museum of Modern Art, and Seinfeld? Something small enough to fit in your pocket yet big enough to generate thousands of customer fan letters over several decades. A product that works in virtually any condition and is still made by a family-owned company in the United States. Welcome to Fisher Space Pen. This is their story. 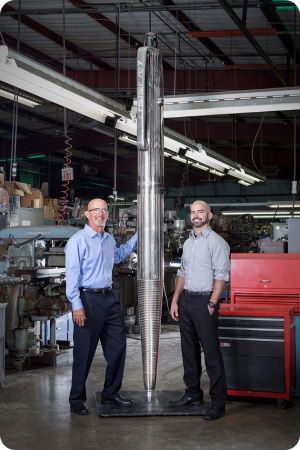 Even though the founder, Paul C. Fisher, revolutionized the pen industry 20 years earlier with the invention of the 'Universal Cartridge Refill', it was his creation of the sealed and pressurized ink cartridge that literally launched the company into space in 1967. Debuting on the Apollo 7 mission in 1968, Fisher Space Pen has been on every NASA manned space flight since. In fact, Fisher Space Pen now has its own permanent exhibit inside the Apollo / Saturn V Center at Kennedy Space Center, which proudly shares the history and products with some three million people a year.

The Fisher Space Pen products have also managed to find themselves onboard the International Space Station and have been utilized by the Russian and Chinese space programs, as well!

"I am proud to continue the principles of accuracy and quality that my father instilled throughout our organization. I've tried to instill the same principles in our children and am proud to see them implementing those principles as they work their way up the chain of command within the company." – Cary Fisher

Fisher Space Pens are built for more than just outer space. The fact is, due to the patented sealed and pressurized ink cartridge, they will write in just about any condition and on almost any surface. Underwater or over grease. Extreme temperatures (-30 to +250°F/-35 to +121°C). Upside down or floating in a gravity-free zone. It doesn't matter, the Fisher Space Pens will perform. The sealed and pressurized ink cartridges last three times longer than the average pen with an estimated 100-year shelf life. As an added bonus, there is vast selection of over 85 eye catching designs and styles.

"It is a product that speaks to the innovation, quality, reliability & performance traditions that are synonymous with our space program."– Matt Fisher

Yes, the Fisher chrome Bullet Space Pen (#400) is in the permanent collection at New York's Museum of Modern Art as a symbol of elegant, industrial American design. And yes, it was the Space Pen featured in the Seinfeld episode entitled 'The Pen'.